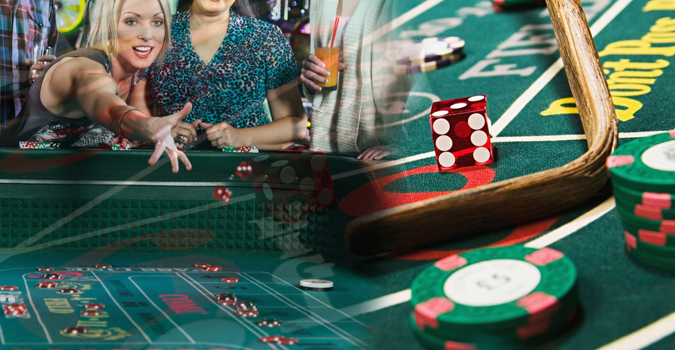 Craps are very simple. This may come off as strange because most people find craps to be too complicated. But, the simple fact is that everything that happens at the craps table is based on throwing or rolling two dice. As one die can only give six possible results, the math is not too difficult once you get the hang of it. With two dice, it is a bit more advanced, but it still remains simple more or less. As long as you know how the die works, you can get better at playing craps by using the math behind it. Listed below are the top 5 mathematical facts about crap that every player should know:

Fact 1: Learning how the dice works

The most common dice are used for playing craps, with each having six sides. Two dice are used in the game, which provides the mathematical base for craps. When you roll two dice, each of them will give you a number from one to six. The final result is obtained when the two are added together. This means that the highest possible total that can be obtained is 12, if both dice land at six, whereas the lowest possible total is two, if both dice land at one. You are probably aware of these things, but do you know how they can influence how you will win or lose when you play craps with real money?

There are a number of reasons why the odds wagers in craps are considered unique. First and foremost, most crap tables don’t really show these betting options. Put simply, you will not find a spot on the table telling you where an odds wager can be placed. Another unique feature of these odds wagers is that they give you a true even house edge. This means that none of the odds wagers have any house edge. If you are familiar with how casinos in Ukraine work, then you probably know that they usually don’t offer wagers without a house edge.

Thus, how will the casinos make money if they offer their patrons a wagering opportunity without a house edge? The simple answer is that it is not possible to place an odds wager unless a come-out roll wager is placed first. As come-out wagers enable online casinos to make a profit, they can offer odds wagers to their patrons.

For pass line odds, the payouts are:

For don’t pass line odds, the payouts are:

For winning a pass line wager, you have to roll a seven or an eleven. This means that there are eight of the total 36 possible combinations where you can win. This gives you a chance of 22.22%. Rolling two, three or twelve means that you will lose. This makes four out of the total 36 combinations, which is about 11.11% possible. With other roll totals, you will not lose or win immediately because they will just set the point. You will win if you roll the point again before you roll a seven. You will lose if you roll a seven before rolling a point.

The most common wager that crap players make on come-out rolls is the pass line. However, it is not a good option when you are playing with a low house edge. When it comes to the house edge, the best option for crap players it to not play at all. There is a built-in house edge in craps, so regardless of what you do, you will lose. A wager on the don’t pass line is the second-best option to explore. The following section will provide you more information about the don’t pass line.

In most ways, the opposite of the pass line wager is the don’t pass line. However, it boasts a house edge of just 1.36%. As there is not much difference between 1.41% and 1.36%, it doesn’t cost you a lot of money to place a pass line wager. In fact, you will have to pay just 50 cents for every $1,000 that you will wager on the bet on the pass line rather than the don’t pass line. A roll of three or two means you win, while a roll of 7 or 11 means you lose. This means that there is a 22.22% chance that you will lose on the come-out roll.

However, you will have the best chances of winning, if you survive the come-out roll. You can win this wager with a roll of seven, before you roll the point. The only reason anyone may make a pass line wager instead of a don’t pass line wager is because of public pressure or they don’t know any better. Superstitious gamblers often frown upon the don’t pass line wager because it is considered betting against the shooter.

But, you need to remember that the way you play craps is up to you and has nothing to do with anyone else on the table. As you are gambling with your own money, you can bet on whatever you like.

Fact 5: Every Other Wagering Option

You have now found out about the odds wager and the other two main wagers at craps. While playing craps, you can make numerous other wagers, but none of them will be as good as the three you have just learnt. As a matter of fact, most of the other ones have a lot higher house edges and you should avoid them at all costs.

I have come across a number of betting systems and crap strategies that involve other kinds of wagers. But, none of these decrease the house edge or improve your chances of winning. No matter what you see or read, the only way you can play craps with the lowest possible house edge is by placing an odds wager or opting for one of the two come-out roll wagers.

Now that you have become familiar with the gambling math involved in craps, you can use it for winning as often as possible. According to the math, there are only three wagers that you should ever make in craps, so all other wagering options can be safely ignored.

If you still believe you don’t understand how the odds or the dice works, it is recommended that you spend some time going over the first section on this page. The key to winning more when playing craps is to understand the percentages and the odds.